The Times should really have something better to publish in today’s Times 2 than its nonsense about an hourglass figure.

This picture reminds me of Ongar Young Famers’ Club where I was trained to judge dairy cows a long time ago: legs, hips, shoulders, spine and head. Oh yes, and udder, teats and milk veins – the four-legged versions are actually useful.

Anorexia, self-harm and depression – understandable if you don’t have thousands to spend on yourself and the world is telling girls that there is a particular shape which they must match. 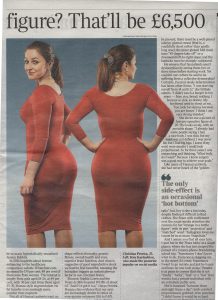 For millennia, male and female human beings have proved sufficiently attractive for the race to continue. Why do we now have to demean ourselves by tolerating greedy people who frighten young girls about their appearance?

This site uses Akismet to reduce spam. Learn how your comment data is processed.