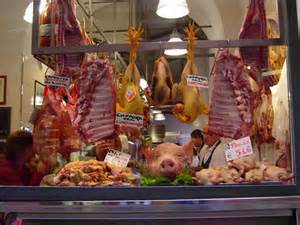 I once whispered the words “Apple sauce” into the ear of a young pig. At the time I was scratching him under the chin; he was ecstatic. Urban friends were appalled and accused me of taunting the pig cruelly. Like those who object to the displays of animals in butchers’ shops they failed to appreciate that compassion can be combined with an eye to an animal’s fate.

It is claimed by some that children will be upset by the display of animal carcasses. Children take their cues as to what is upsetting from the adults around them; if the adults ignore the reality of what they eat in order to indulge their own sentimentality then they mislead the younger generation.

I have been able to kill for my own table, chicken, rabbits and pigs without the stress of modern industrial methods which require animals to be transported away from familiar surroundings and treated as industrial material rather than as sentient creatures. How can we sensibly monitor such an industry without acknowledging that most farm animals are bred for our plates?

This site uses Akismet to reduce spam. Learn how your comment data is processed.